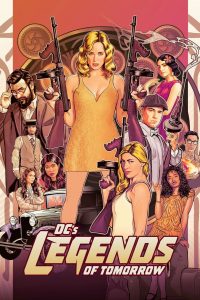 DC’s Legends of Tomorrow: Season 7: In season seven, Legends co-captains Sara Lance and Ava Sharpe think they and their beloved crew can finally go home and relax after saving 1925 Earth from an alien invasion. Too bad their time travel ship, the Waverider, gets blown up by a second Waverider…meaning the Legends are now trapped in 1925 Odessa, Texas! The only way to get home, and get payback on their mysterious new enemy, is to journey to New York City and find the forefather of time travel, Welsh inventor Dr. Gwyn Davies. But with no Waverider, no way of knowing how they’re impacting the timeline, and a time traveling foe hunting them, this will be the toughest mission yet for the Legends. Along the way, they pick up a familiar but shocking new teammate: a real-life, human Gideon, who’s knowledge of the timeline may be the key to solving all of the Legends’ problems.