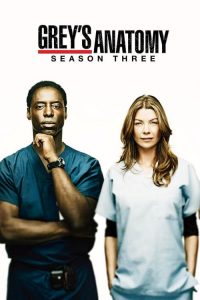 The third season of the American television medical drama Grey’s Anatomy, commenced airing on the American Broadcasting Company on September 21, 2006, and concluded on May 17, 2007. The season was produced by Touchstone Television, in association with Shondaland Production Company and The Mark Gordon Company, the showrunner being Shonda Rhimes. Actors Ellen Pompeo, Sandra Oh, Katherine Heigl, Justin Chambers, and T.R. Knight reprised their roles as surgical interns Meredith Grey, Cristina Yang, Izzie Stevens, Alex Karev, and George O’Malley, respectively, continuing their expansive storylines as focal points throughout the season. Previous main cast members Chandra Wilson, James Pickens, Jr., Kate Walsh, Isaiah Washington, and Patrick Dempsey also returned, while previous guest stars Sara Ramirez and Eric Dane were promoted to series regulars, following the extension of their contracts. The season followed the continuation of the surgical residency of five young interns, as they experience the demands of the competitive field of medicine, which becomes defining in their personal evolution. Although set in fictional Seattle Grace Hospital, located in Seattle, Washington, filming primarily occurred in Los Angeles, California. Whereas the first season mainly focused on the impact the surgical field has on the main characters, and the second one provided a detailed perspective on the physicians’ private lives, the third season deals with the tough challenges brought by the last phase of the surgeons’ internship, combining the professional motif emphasized in the first season, with the complex personal background used in the second. Through the season, several new storylines are introduced, including the arrival of Dane’s character, Dr. Mark Sloan, conceived and introduced as an antagonizing presence.